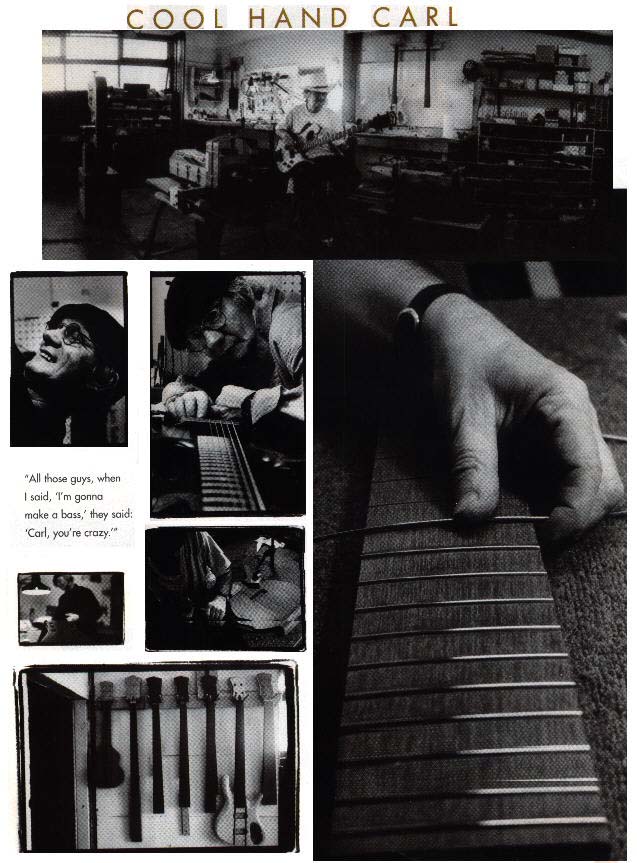 When a real live musician turns to making instruments, the quality is already built in.

One day, Carl Thompson, who used to play guitar and bass with Billy Ward and the dominoes (who put the legendary Jackie Wilson on the map in the fifties), got sick and disgusted with the heavy Fenders and Rickenbackers he was always lugging around onstage:

I got angry and said, This is ridiculous! These things were bulky, they were out of balance. Once when I was tuning up, I reached up and almost fell off the bandstand.

Playing six hours a night on three-night weekend gigs, out of what he calls a top-40 gig in Bay Ridge, Carl felt he was fighting the instrument. You know those big companies don’t care. I began studying on how to build a better bass.

He went to the library and got a book: The Life and Work of Antonio Stradivari. It told about the strength of wood when it was cut the right way; about balance, the feel of an instrument to the hand, angles and relationships.

When Carl made his first bass, he showed it to the famous jazz bassist Stanley Clarke, who immediately ordered one. The most frequent comment Carl now gets on his basses is: I never really knew that this is the way it’s supposed to be. His fame spread, and soon it made sense to open a store.

Now he doesn’t play so often by himself, but enjoys steering young musicians right with fine instruments from his shop on Boerum Place. Unlike George and Janine, he’s been at the same address since 1968: This neighborhood is the greatest. I always look at it as a big Pitcairn (Pennsylvania, Carl’s hometown), never as New York City. It’s a big small town.

I know everybody here. I know John the druggist, I know Alex the shoemaker. I actually know them! He smiles broadly. I made it that way myself, too.

All those guys, when I said: I’m gonna make a bass, they said: Carl, you’re crazy.