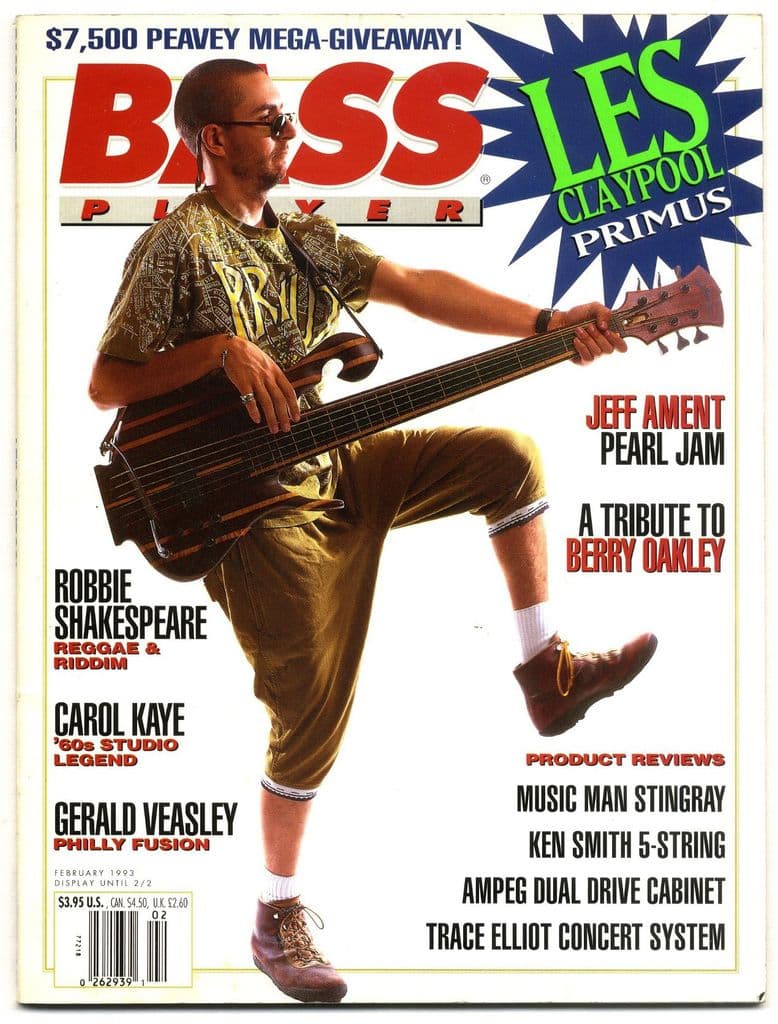 GW: The bass line on “DMV” is really out there. Do you conceive of these things modally or what?
CLAYPOOL: It just comes out of jamming – I think that one was a hotel room jam. I wrote it on my [Carl Thompson] six-string fretless [See Collector’s Choice, page 83]. But when we recorded it, I played it on this new bass I have: a six-string fretted model that Carl gave me. It’s got an incredible sound-real low and farty. I played it on “Hamburger Train” too. Carl put really light gauge strings on it. The low B string is like the high G on a regular bass, and it goes up from there. [Les’s six strings are tuned, low to high, B, E, A, D, G, C.] The top string is actually a solid-core string; it isn’t wound. You can get a great twanging sound off the top string, like a Strat or something. The strings are very closely spaced, compared to my fretless six. Carl put frets on this one so I could do tapping. If I’d had this fretted bass for “Jerry Was a Racecar Drive” [Les’s tapping tour de force on Sailing the Seas], I’d probably have used it instead. It makes your fingers super-strong to do tapping on a fretless, but frets make your life so much easier.
GW: It was pretty ambitious of you to take on that six-string fretless a few years back.
CLAYPOOL: Yeah. At first I was really afraid I’d bitten off more than I could chew. Because I play a lot of chords, which just sounded like a pile of shit on the fretless. The fretless was more of a horizon-broadening device than anything else. Because I was getting pretty bored with four-string bass.
GW: Did the six-string fretless broaden your compositional horizons?
CLAYPOOL: Totally. Even on the new album. To me, “Bob” is just a total six-string fretless song-it’s just made for that particular bass, which is so amazing. It has a 36-inch scale, so it’s like a piano or something. It can get thunderous low end without sounding muddy. You can hear that on “Bob” or even on “My Name is Mud” –crunketty-crunkettycrunketty…. It’s like someone taking a ballpeen hammer to piano strings.