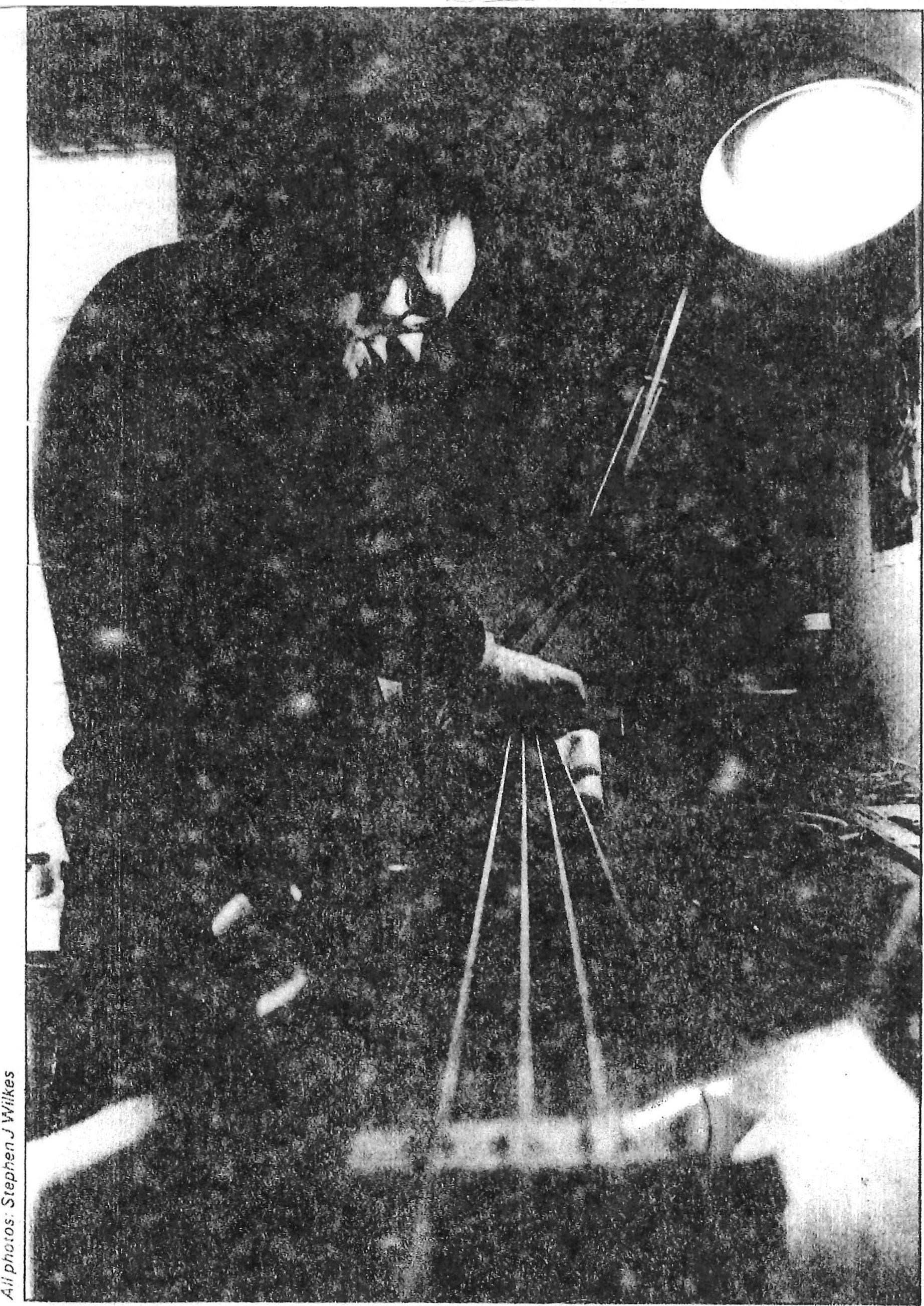 During the past few years a handful of young luthiers have become well known for beautiful handmade guitars and basses. One of the most respected of them all is Carl Thompson.

Carl was born in 1939 in Pittsburgh Pa, the second youngest of eight children; five brothers and three sisters. His father played guitar, steel guitar and mandolin and all Carl’s brothers could play to a greater or lesser degree. But Carl was the best of the bunch.

What became immediately apparent to me when I met Carl recently was the respect, admiration and affection that he feels for his father who died just a few years ago. As well as being a proficient musician, his father was a very inventive man with the sort of mind that needed to know how everything worked, having such a degree of skill that he built his own direct-to-disc machine and lathe from bits and pieces, working after hours while employed at Westinghouse. The machine is still working today at Carl’s brother’s place in Ferdolia NY. What’s more, in 1934/5 he made his own double-coil pickup for a Gibson L4!

At that time a lot of mandolin players and guitarists hung out at Carl’s home and his father made pickups for the mandolins. Soon after experimenting with an old Kay guitar around 1945 he forced a piece of wood in the centre, cut a new nut to take four strings instead of six, made a set of strings from existing piano strings, put the pickup on, and had himself a bass guitar! I heard a tape of this instrument playing and, although tuned an octave down from the mandolin, it was amazingly full and rich.

Needless to say, growing up in such a musical and inventive environment Carl couldn’t fail to be inspired in both directions. He suffered poor health as a child and consequently spent a lot of time practising guitar while his friends were out playing. By the time he left school he was playing in rock’n’roll groups doing a lot of late Fifties nationwide tours with groups such as the Platters.

After getting out of the Army he ran into an old friend from Pittsburgh, bassist. Russell George, who was fast gaining a reputation as a top studio bassist. Russell tried to persuade Carl to go to New York City and try his luck, but Carl wasn’t sure he could cut it as a guitarist. Finally Carl got a call from Dan Armstrong who needed someone to help out in his workshop, and he decided’ to go. He figured that by being in Dan’s shop he’d probably pick up some gigs as well, so he got the bus to New York and moved into a cheap hotel. He was paid only around $65 a week — and that was when Dan had it! He too was hard up a lot of the time. Carl was paid to watch a guy called Eddie Deal work, and from him he learned just about everything. He also kept the place clean and ran errands just like any apprentice, although by this time he was in his late twenties.

It was at this time that he met his present partner, Joel Lutkin. Joel was teaching guitar at the time and he and Carl started to hang out together — Joel showing Carl, among other things, how to get around in the Big Apple.

Dan Armstrong then took a shop in Greenwich Village at La Guardia Place and it was there that they produced the first of the now-famous Plexiglass guitars — however Dan then got involved with Ampeg and closed down the shop so that, in Carl’s words, they were ‘out on the street again’, with nothing but their by now considerable reputations. So they went their separate ways but kept in touch and helped each other out wherever possible. 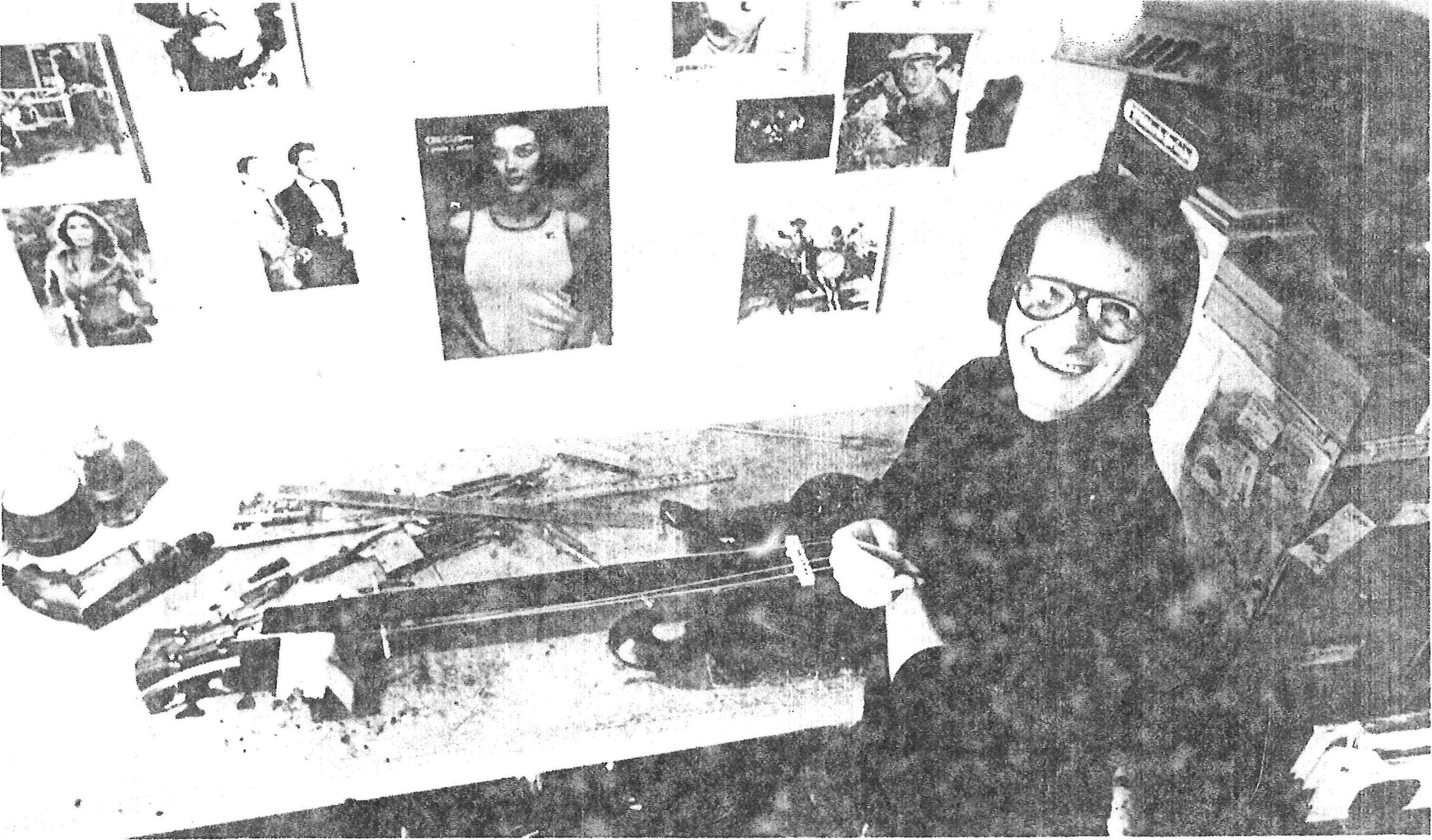 Then Charles Lobue came into the picture (see Etcetera Apr ’79 SI). He’d often hung out at Dan’s shop and played chess with him, but he was quite a handyman and a fair classical guitarist. He had a few dollars so he persuaded Carl to go into business with him and this became the famous Guitar Lab (Lobue Thompson Guitars Incorporated). Carl continued to work on people’s guitars and basses but he still liked to talk and sit and play with friends who came into the shop; Charles was a bit of a worrier and clockwatcher — so for personality reasons they called it a day.

All this time Joel Lutkin had been in the picture. He had a keen business sense and still enjoyed teaching and, more importantly, being involved in the music business. After much thought Joel and Carl decided to become partners and give it a try, renting rooms on 7th Avenue in Manhattan, the ‘Tender Touch Massage Parlour’ across the street being the deciding factor in their choice of location! This time, while not discouraging the general public, they tried to maintain first and foremost a ‘pro’ environment. Carl was able to specialise because of his reputation. Their friends helped again. Russell George spread the word in the studios and so did another fine player, Bobby Cranshaw. They were soon working flat out making improvements and adjustments to their friends’ instruments; as Carl puts it, ‘Putting frets in, taking frets out, maple fingerboards off, ebony fingerboards on, truss rods out, truss rods in, until maybe we ended up with a better Fender.’ One day it suddenly dawned on them that with all the money Bobby Cranshaw had spent on his bass over the course of the year they could have built him what he wanted from scratch with ‘all that hotrodding’!

So in the summer of 1973 they bought some machinery, some wood, borrowed some money and got going. It was very tough. They worked 18 or 20 hours a day and just crashed in the workshop in the new premises they now occupy in Court Street, Brooklyn. They were full of determination, though, as Carl put it, ‘We had to watch out for the sheriff a lot of the time!’

After a great deal of experimentation with construction techniques they built the first bass in 1974. It closely resembled a Jazz bass in appearance. This eventually evolved into the present bass which I feel is a model of precision and, especially, balance.

All the time they had been in Brooklyn a lot of young guys had worked for them. One of them, Ronnie Blake, eventually bought a place up in the country in Connecticut with a big double garage and here he cuts out all the bodies, now that the design has been decided upon. These are then sent to Carl’s workshop where everything else is finished totally by hand, another guy working alongside Carl and Joel now by the name of Michael Parisi who Carl says has ‘terrific chops!’

Although Carl has made guitars (around 15) he now builds basses just about exclusively and has built over 200. He makes about four a month and considers that enough — obviously he could earn more by turning out more basses, but compromise is totally out of the question.

Stanley Clarke’s piccolo bass was made by Carl. It was expensive because no-one had made one before and he had to figure out the scale and, more importantly, the string gauges. This is because the instrument is tuned an octave higher than a normal bass. D’Addario make all the strings for Carl’s instruments and at that time they sent up about a dozen different sets of various gauges — Carl crouched underneath the workbench turning the machine heads so as not to be struck by flying strings!

As to the materials used in Carl’s basses, he told me that he uses many different kinds of wood for the bodies as long as it’s good, hard wood. Fingerboards are either rosewood or ebony. He uses Schaller machine heads and also used their pickups until recently, but now uses the Di Marzio Jazz Bass double coil humbuckers. The bridge which he (and many others) consider the best around is the Leon Quan Badass. The control panel on Carl’s basses features two volume controls, one tone control, a three-way toggle switch, phase switch and a three-way standby switch. There are 26 frets on the fingerboard, although Carl and Joel used to make instruments with up to 29.

Carl still feels that there is room for improvement in a lot of things. He likes the idea of brass bridges because of their sustaining qualities, but feels that no-one has perfected one yet. Brass nuts he dismisses as pointless — making the point that once one plays beyond the first fret the nut is dispensed with, that one may as well use brass frets. On the subject of pre-amps he told me that he has some work going on at the moment on them but feels that they too need perfecting. He was full of admiration for the Alembics but in general is against too much electronic specialisation in his own instruments. As Joel put it, ‘A guy needs an instrument that’s going to work every night and that he can get serviced if need be in most towns, not something so specialised that if it goes wrong he’s had it!’

Carl also pointed out that the problem of dead spots was often caused by faulty truss rods, the neck blocks vibrating; all sorts of things that happened when the instrument wasn’t ‘made right’. I’ve already remarked on the superb balance of his instruments, and Carl claimed that if I was playing a gig, he could stand next to me on the stage and adjust the truss rod without me knowing it because it was put in properly in the first place and works as it should.

Another unique feature of his basses is the beautiful heel on the neck. This was arrived at more by accident than design. He was building a bass completely from birds eye maple, a notoriously hard wood to work with, and was cutting out the slot for the neck in the usual way by centring the neck so that it was right in the centre of the body, the shape of which he’d drawn out on a piece of wood, scribing a line around the neck then routing it out and chiselling out the corners, squaring it off to make a mortice. This method is very time-consuming and also, in this particular instance, the birds eyes kept popping out of the wood until he messed it up. Carl cursed and threw his chisel at the wall, declaring that they’d got to ‘make a hole without making a hole’. This made everyone around exchange knowing glances! But he did it — by cutting out the neck square, adding the square heel and joining it to the central body section he had in fact made a hole, without making a hole! 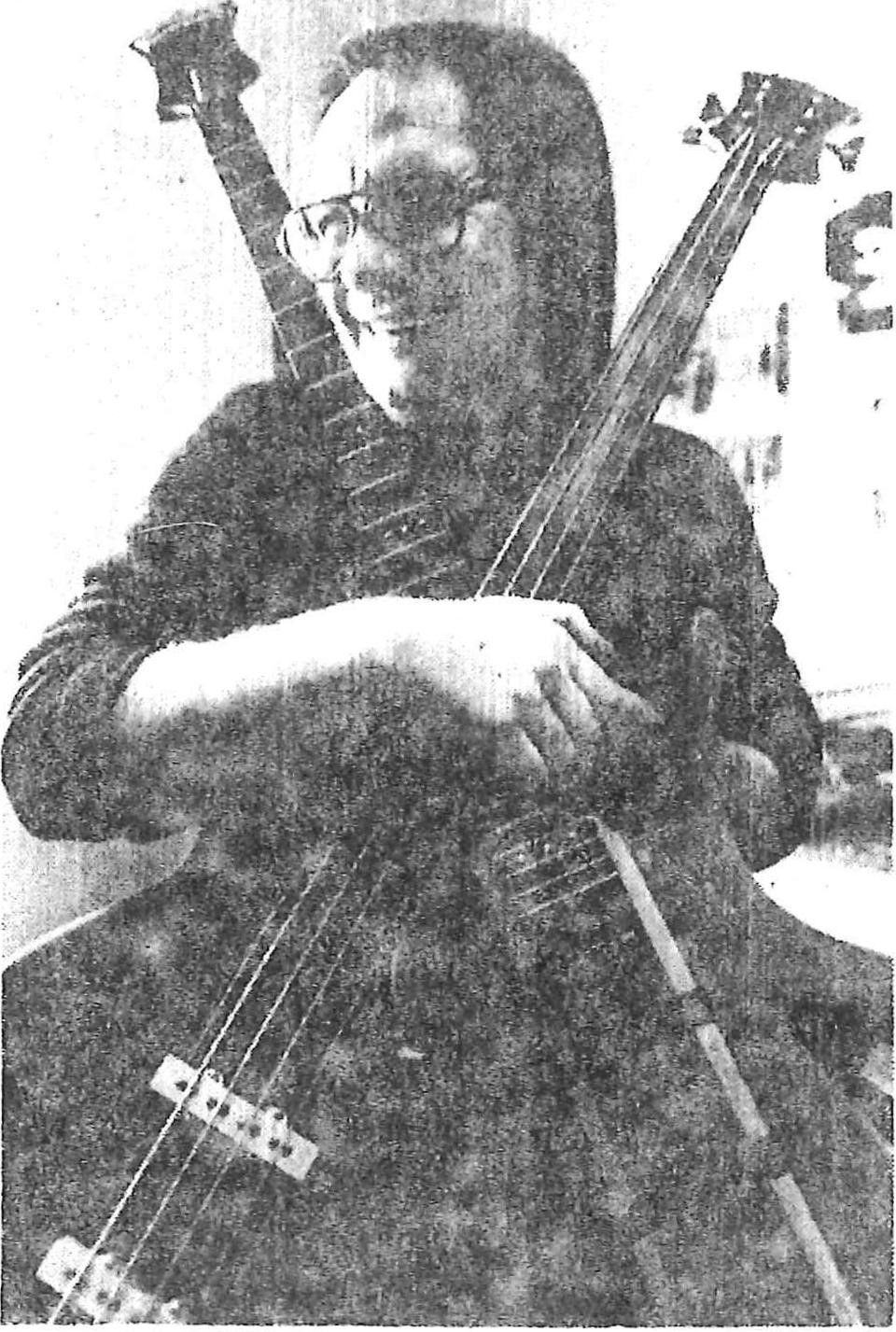 All these things aside, however, Carl Thompson still thinks of himself as a ‘a be-bop jazz guitar player’, and hates what he calls ‘that great luthier bullshit’. To quote him: ‘Hell, I haven’t done anything great, anyone who cared enough to sit and work it out could do the same — you could do it Colin!’ Now this for me, as a man who finds it difficult to change a plug, was too much and I reached hastily for more wine!

Finally, Carl Thompson builds beautiful basses and feels that due credit should go to all the people who have helped him along the way, especially Russell George and Bobby Cranshaw, not forgetting Ben Brown who was Dizzy Gillespie’s bassist and has three of Carl’s guitars.

I find it a comforting thought that in these days of the mass hype/mass production, and instant everything else, there are people like Carl Thompson around who build guitars like they should be built —slowly, with love and from the heart.